Afield was founded in 1986. At this location, Afield employs approximately 3 people. This business is working in the following industry: Guns and ammunition. Annual sales for Afield are around USD 338,000.00.

Engaged in: Shopping other; Guns and ammunition

Q1
How long has Afield been in business?
Afield has been in business for around 36 years.
Q2
What is the phone number for Afield?
The phone number for Afield is (513) 353-3536.
Q3
How big is Afield?
Afield generates approximately USD 338,000.00 in revenue annually, and employs around 3 people at this location.
Q4
Where is Afield located?
Afield is located at 7208 Harrison Ave, Cincinnati, OH 45247, USA, Ohio.
Q5
Is there a primary contact for Afield?
You can contact Afield by phone using number (513) 353-3536.
Q6
Are there other contacts associated with Afield?
We have 1 additional contact(s) for Afield. They include: Harold L. Hensley.
Q7
What is the web address (URL) for Afield?
The website for Afield is afield.business.site.
Q8
What are the annual sales for Afield?
Afield has annual sales of approximately USD 338,000.00.
Q9
How many people are employeed at Afield?
Afield has around 3 employees at this location.
Q10
Does Afield have somewhere to park?
Yes, Afield has valet parking available. 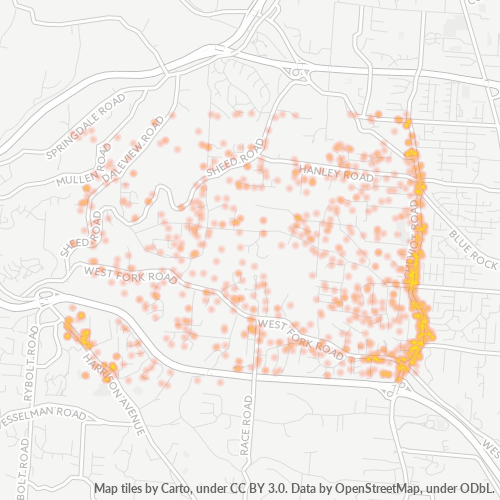 Stats and Demographics for Zip Code 45247